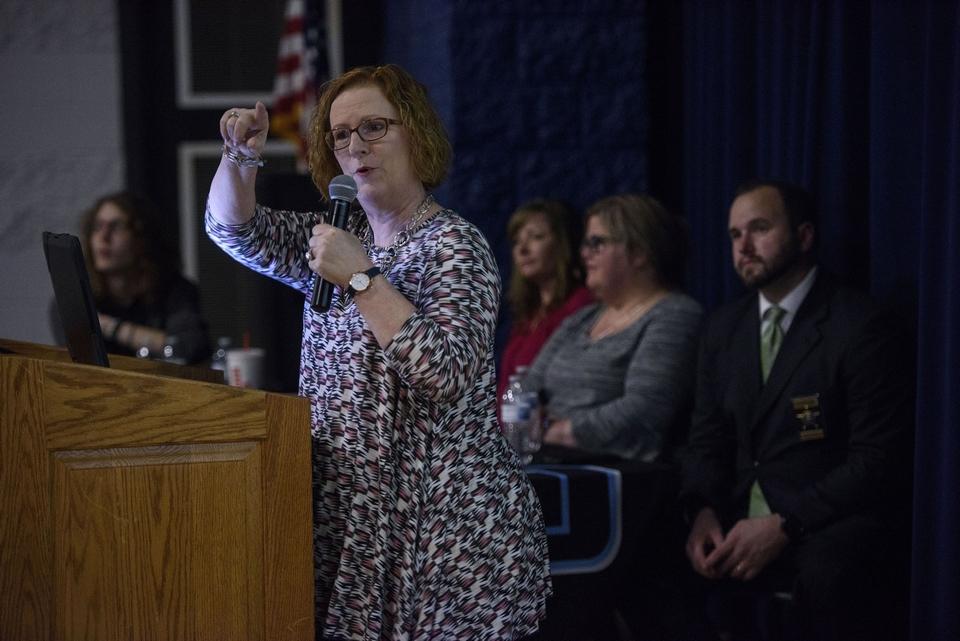 In 2016, 11 Harnett County residents died from overdoses of opioids or heroin. The number soared in 2017 to 20 deaths.

That’s when Harnett County Sheriff Wayne Coats said he decided to be proactive against the opioid crisis on his doorstep.

“I thought, ‘What can we do to educate people?’” Coats said.

He talked with Lt. Josh Christensen, who heads up the Narcotics Division in the Sheriff’s Office and came up with a plan.

“I wanted to go to the high schools and educate these young folks and get out in front of it and slow it down,” Coats said.

Earlier this month, he introduced an opioid awareness program in the county’s high schools, in an effort to educate the students about the dangers of narcotic painkillers such as oxycontin, oxycodone, opana, Vicodan and fentanyl.

The program was presented Tuesday to the seniors of Overhills High School. Coats assembled a panel including the mother of an addict, a pharmacologist, a substance abuse counselor and a recovering addict.

A woman whose son is an addict and Alex, who did not give his last name, talked about how opioids and heroin nearly destroyed their lives or the lives of a loved one.

Alex began smoking marijuana as a teenager. He didn’t like smoking, but then he was arrested for marijuana possession. He ended up on probation. Afterward, a friend introduced him to opioids.

“I built up a tolerance pretty quickly,” Alex said. “I tried to get them all the time.”

A friend’s suicide pushed him into heroin use and that continued for three years.

“That was huge for me,” Alex said, “a big, big turning point for my addiction.”

The mother of a son who has battled addiction for 10 years spoke about what her family has gone through. She wished to remain anonymous.

Her son began using drugs when he was about 13. Eventually, she noticed he was sleeping excessively and throwing up. He quit hanging out with his friends, withdrew from the family and gave up baseball.

He sank deeper into the world of addiction, getting arrested for stealing guns during a break-in. He moved in with a friend and on one occasion was found lying at the side of a road, face down. Another time, he was beaten and robbed by four people he thought were giving him a ride.

He hit rock bottom when he tried to hang himself in front of his mother and sister. He’s not clean, she said, but he’s not using as much as he was.

“Every day is a struggle for him,” she said. “I could feel sorry for myself. But I consider myself a lucky parent because I still have my son.”

Sandy Chadwick, a pharmacologist at a Lillington pharmacy, discussed the chemistry of drugs and its effect on the brains of teenagers. She talked, too, about how opioids work on the brain and can cause breathing to stop.

Amy Brown, an addiction specialist and director of Daymark Recovery Services in Buies Creek, said an addict is not easily identified.

“So, it’s that mother in the parking lot, someone you go to church with, the person working in a store, the person driving your bus.

“Look to your left, look to your right. Pretend you’re looking in a mirror. That, in reality, is what an opiate addict looks like,” she said.